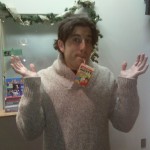 Eats & Shrugs is Lee Porter eating and shrugging his way through life.

Lee eats. Lee shrugs. And Lee “likes” other stuff, too.

This is where I’ll be sharing all of that for my friends, family and all good people.

Thanks for visiting. Let’s eat and shrug it out … 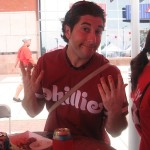 Writer/producer Lee Porter’s original, comedy Web series My Ruined Life consists of four seasons and was awarded “Best Web Series Shot In Philadelphia” and “Audience Favorite (Web Series)” by FirstGlance Film Festival in 2012. He is the Mid-Atlantic Regional Manager for Two Roads Brewing Co., a member of the Board of Directors of Azuka Theatre, editor/founder of the food/drink site Chocolate Covered Memories, former Philadelphia beer reporter for Ale Street News,  and a member of the Fishtown Beer Runners. Lee’s work has been featured on Comcast SportsNet, Food Network’s CityEats-Philly, The Gaggle, Liminal Fiction, Philadelphia City Paper, the Philadelphia Daily News, the Philadelphia Inquirer, Philadelphia Weekly‘s Style blog, Philly.com, Shmitten Kitten, Zoo With Roy and even tweeted by Questlove. Lee “likes” eating and shrugging … and making fun of social media addicts (even though he is one himself).